“JUST THE TWEETS”: Volume I

“JUST THE TWEETS”: Volume I covers President Donald J. Trump’s Tweets posted from his personal Twitter Account during his first year in office (2017). 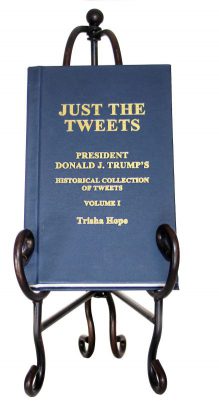 “JUST THE TWEETS”  is a “Historic Collector’s Series” archiving President Donald J. Trump’s Tweets, posted from his @realdonaldtrump Twitter account each year of his Presidency. You could say… “It’s History Unfolding One Tweet at a Time”… in President Trump’s own words!

It is my hope that The “Just The Tweets” Collector’s Series (8 volumes/8 years), will be enjoyed by all and handed down to your future generations.

The Deep State is attempting to erase many aspects of our history that don’t support their self-serving mission. This is evidenced in part by their condoning the destruction of our historical landmarks around the country and their ongoing push to eliminate “factual” American History from our children’s schools. The Deep State would like nothing more than to fully indoctrinate your children into believing our Constitution, Freedom and Capitalism are evil and socialism is Nirvana. We can’t let this continue!

Mark my words…if the Deep State wins the 2020 election, they will do everything in their power to erase President Trump and his accomplishments from history.  The “Just The Tweets” Collector’s Series is a great way to preserve the TRUTH for your future generations. Don’t let the “Fake News” be the historical resource your kids depend upon.

As you read Volume I  you’ll begin to… 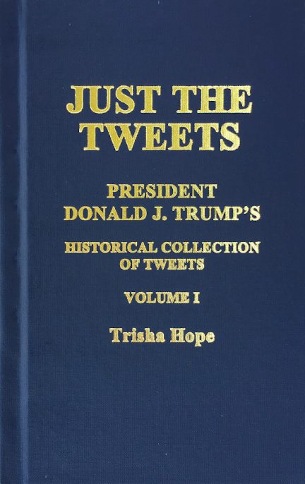